Voting for the Lift-Off Global Network April 2020 sessions are OPEN!

Head to https://vimeo.com/ondemand/liftoffsessionsapril205 follow the rules on the page and vote for our episode of Cops and Monsters! The top 5 films/shorts/episodes will go onto the next round with the judges and we really want Debbie Moon’s episode to do well!

The rules are as follows:

“Enjoy and please remember to share this great collection with your friends, family and peers. The Lift-Off Sessions exists to bring new eyes to the independent film market. Thank you for supporting true, indie cinema!

Please vote by first writing VOTED in the comments section, followed by the names of your two favourite films. Then head to our website on liftoff.network/online-vote/ to fill out the more detailed voting form. When selecting your festival page from the drop down menu, this page is SESSA20205.
Votes with only one selection/ the same film twice will be INVALID.

Strictly one set of votes per person.
The top five films from each of the 5 programmes of the social round will be rated by Lift-Off’s Official Judges who will go further in-depth and score the films based on multiple aspects. The film with the highest overall score wins an official selection for a live screening later this year at Pinewood Studios AND Raleigh Studios, Hollywood.
Voting will end 10pm (BST) Sunday 19th April.

After the festival, these films will be removed from the public domain.”

Whilst we’re in isolation and lockdown, unable to go outside and film new episodes of Cops and Monsters series 2, we’ve decided to use our time wisely and produce Cops and Monsters: The Audio Series!

The 6 part series will consist of 10 standalone episodes set within the Cops and Monsters Omniverse, with familiar characters and brand new faces (or should that be voices!) expanding and exploring new stories.

We will then release the episodes either weekly, bi-weekly or monthly, for a small fee with all monies earned going straight to a chosen charity.

At the moment we’ve secured some of our cast from series 1 and 2 to star in our new episodes and we’re reading a LOT of scripts from writers who have expressed an interest in penning the episodes.

If you’d like to be in an episode with a cameo role or have a character named after you or a loved one, you can join us on Patreon at this link. You simply choose a tier with perks that you like and each month that money is sent to our Cops and Monsters Patreon for us to make new content – whether that be audio adventures, short films or full episodes – or even a comic! Click HERE to find out more.

In the meantime please enjoy “Remembrance” by BAFTA winner Debbie Moon – the opening episode of Cops and Monsters Series 2:

All 8 episodes of series 1 are available to watch now on Amazon Prime and Google Play.

“Remembrance”, our opening episode of Cops and Monsters series 2, has been selected for the Lift-Off Global Network April 2020 Sessions!

Congratulations to our amazing cast and crew for all of their hard work.

Once the competition opens we will share a link for you all to vote for our episode and hopefully we can progress to the next round.

You can visit our AWARDS page to see all of the festivals we’ve been selected for and the ones we have been successful in winning at this page.

Cops and Monsters’ opening episode of series 2, “Remembrance”, written by BAFTA winner and Wolfblood creator Debbie Moon, has won the WRPN Global Webisode Competition for Excellence! Thank you to the judges for picking our episode!

Congratulations to the cast and crew of our amazing episode! You can watch Debbie’s episode below:

We’ll be launching the Kickstarter campaign for episode 2, written by BAFTA winner Laura Anne Anderson, on August 1st for 31 days. We hope to raise at least £3360 so we can continue our Uprising storyline!

Thank you again for all of your support!

“Remembrance”, the opening episode of Cops and Monsters: Uprising, has been selected by the WRPN.TV Global Webisode Competition!

The episode, written by BAFTA winner Debbie Moon, will compete in the competition and we’ll find out the results from July 20th.

Cops and Monsters has been selected for the Lift-Off Sessions at Pinewood Studios this year. We submitted our latest episode, “Remembrance”, written by Debbie Moon and starring Ellen Patterson, Billy Kirkwood, Innes Anderson and Chris Bain. They were joined by new series regulars Stephen Purdon and Helen Cuinn, as well as guest stars Barbara Rafferty and Bill McBain.

The entries will be made available online for members of the public to vote for, followed by a round with the judges. Once the links are available we’ll be sharing them here, on Twitter, Facebook and Instagram.

Below are ALL our free available episodes, with all of series 1 available to watch on Amazon Prime UK, US and Amazon Instant Video and Social Screen.

If you like our show and want to support us in making our next 5 planned 20 minute episodes click here for more information. 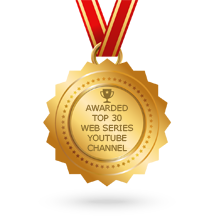 According to the Founder of Feedspot, “Cops and Monsters” has been selected by their panelist as one of the top 30 Web Series YouTube Channels on the web.

If you head over to the blog at this link you’ll learn that we’re 22nd in the list!

Thank you Feedspot for choosing us!

The festival will be held at the Holiday Inn Tanglewood in Roanoke, VA in February.

Their media guest of honour is Buffy star Amber Benson, so we hope she likes what she sees with Cops and Monsters!

This is our 4th festival in which we have been selected for competition, and hopefully it’ll be our 3rd win!

We’ve been selected to be screened in competition as Web Fest New York this March!

We have applied for festival attendance funding from Creative Scotland so fingers crossed they will help us get to New York so that we can promote our series.

In the meantime you can help us make our final 2 episodes happen by grabbing a perk at our Kickstarter at this link!

“The New Recruit”, which is the first episode of Cops and Monsters, is being screened at the Vault Film Festival in London on the 12th of February.

To buy tickets and find out more click this link.