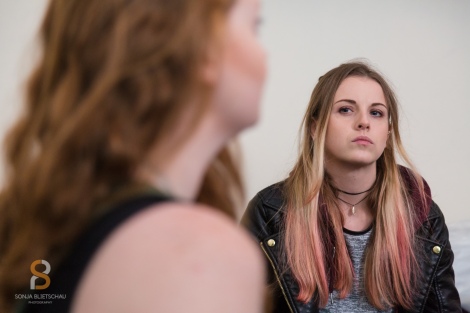 On August 1st we will be launching a Kickstarter campaign to shoot Laura Anne Anderson’s new episode of Cops and Monsters: Uprising.

The latest episode written by Laura, her 2nd so far in the entire run of episodes, is titled “Bad Moon Rising”:

“A Monster roams a supernatural zone, mutilating and eating anyone it finds. Alexis is tormented by a vision of The Cult of Many Faces, and worries that her confinement is driving her to madness. Maya battles hostile SPIDERS colleagues and a bigoted new directive from sleazy Minister Clark in her mission to uphold the law. When an old acquaintance ambushes Maya outside SPIDERS HQ, desperately seeking her help, things go from bad to worse.

Werewolf therapist Jenny Connor is badly shaken – she was part of a programme aimed at helping supernaturals, and something has gone terribly wrong. A Monster has been unleashed – THE Monster.

Distrusting SPIDERS and with nobody else to turn to, Jenny enlists Maya and Alexis to help her find the Monster and put an end to the violence. The group travel to Zone 3, the Werewolf ghetto, to investigate.

Between the full moon, Maya’s split loyalties, The Cult’s hounding of Alexis, and a dark secret kept by Jenny, it’ll be a wonder if they make it out of Zone 3 alive.”

We’ll be attempting to raise £3360 – which will allow us to pay our cast, crew, post production, props, editing, sound design, music, makeup, catering and more – offering signed scripts, DVDs, cast photos, walk on roles in the new episode, associate producer credits, producer credits, executive producer credits on IMDb, and more. This will be our last attempt to fund our next episode. We have 5 scripts left to film – written by Simon Underwood, James T Harding, Philip Lawrence and Fraser Coull. All episodes we manage to film will be streamed on Amazon Prime US, UK and Amazon Instant Video.

If you’d like to support our new series but would prefer to pledge to us monthly you can join us on Patreon instead. Click this link to find out more.

Below you can watch all the available free episodes of Cops and Monsters. To watch the rest please visit us on Amazon Prime!